The Annual Stockholders Meeting for George C. Grape Community Hospital was held Monday evening, February 6, 2012. The Annual Report was given by the President/CEO, Michael O'Neal.

Dr. Kelli Woltemath, D.O and Chief of Staff shared encouraging news about the addition of new staff to the Med Clinic P.C. and efforts to build their practice.

The increase in the number of Hospital Auxiliary members and the funds raised for college scholarships and new hospital equipment purchased was highlighted by Auxiliary President, Pat Moody.

Charlie Zanker serves as the President for the Hospital Foundation. He reported on four major projects that were funded through the donations, grants and fundraising efforts of the foundation this year: Hospital bed replacements, driveway and sidewalk renovations, a new anesthesia machine and a new colonoscope.

Sixteen news stockholders were welcomed and recognized for donations to the hospital.

The election of Board Directors from Districts I & II were voted by the Stockholders. 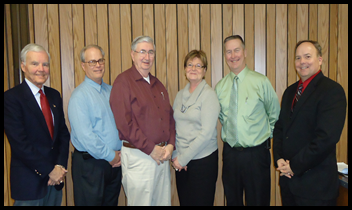 
At George C. Grape Community Hospital, we understand that healthcare is evolving. Advancements in medicine and strides in technology are providing local communities access to better healthcare. It is our desire to provide the best care in our region. Our staff will be here to help you and your loved ones when the need arises. The comfort and care of our patients is our major goal.