Yvonne Dalton's career in healthcare started in 1974 when she was hired as a nurse's aide at George C. Grape Hospital. Gloria Mattice, Director of Nursing invites the public to join the hospital in recognizing Dalton for her nearly 37 years of service and to thank her for her hard work and loyalty on Wednesday, December 26th at 2:00 p.m. Dalton recalls that in 1974, Pat Anderzhon was in charge of training staff and credits her for getting her started off on the right path. The "400 Wing" or south hall of the hospital was her first assignment. In the 1970's the 400 wing was for the pediatric and isolation patients. Dalton noted that it was "Never dull on that hall!" In 1984, the farm crisis was in full swing and changes in the federal Medicare programs forced hospitals to tighten their budgets. Locally the hospital laid-off all of the aides. Not being the kind of person to sit around, Dalton found a job as short order cook at the Lakeview restaurant until 1986 when the hospital hired her back as a ward clerk. Dalton has remained a ward clerk and trained a lot of the new ward clerks over the years. She has enjoyed the position very much. She feels like the co-workers here are like her second family. If you have any problems, they are the first to come and ask how they can help. When she had hip surgery, she came back to Grape for Skilled Care while she recuperated and started her physical therapy. The staff were all supportive and kept her spirits up. Now she looks forward to being at home with Harold, her husband of 54 years. She is looking forward to spending time with her two daughters, grandchildren and great grandchildren. Director of Nursing Gloria Mattice recalls "When the computers and Electronic Healthcare Records were introduced it was a challenge for Yvonne, but she stuck with it and has done a great job and continues to improve. We have all enjoyed working with Yvonne and want to thank her for her hard work and loyalty to the hospital. We wish her the best of luck in retirement and hope she comes in to visit us often." 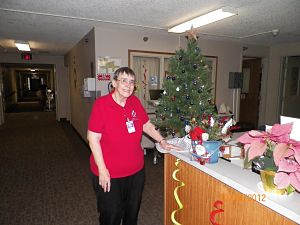 Photo Caption: Yvonne Dalton will celebrate a career spanning nearly 37 years in healthcare at George C. Grape Community Hospital on December 26th at 2:00 p.m. The public is invited to attend and wish her well.


At George C. Grape Community Hospital, we understand that healthcare is evolving. Advancements in medicine and strides in technology are providing local communities access to better healthcare. It is our desire to provide the best care in our region. Our staff will be here to help you and your loved ones when the need arises. The comfort and care of our patients is our major goal.